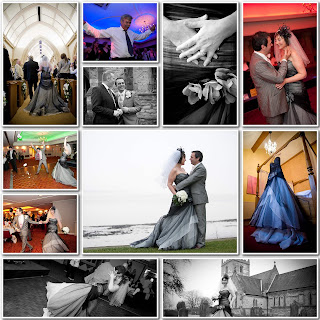 I shot my first wedding of the year a couple of weeks ago and after a busy couple of weeks with commercial photography, I’ve just got round to finishing the edits. I was really excited to be back behind the lens to cover the year’s first story and Jill and George’s special day was a real treat.

I started my coverage with Jill and her family at the Green Dragon, Welton East Yorkshire where we had a lot of fun with the preparations – Jill’s 2 sons were really great to photograph and could have easily have been mistaken for the front men out of the coolest indie band out there! Jill’s dress was really unusual and once her sisters had helped her in, she looked just great.
The ceremony was held at St Mary’s Church in Elloughton, a gorgeous little church that I hadn’t shot in before but looked super in the group shots that we did inside (way too cold for outside!) My shot of the whole wedding party required some ninja skills as to access the upper balcony, I had to scale the bell tower’s very narrow stair case and with 2 cameras in tow, this was no mean feat!
Jill and George held their reception at the Country Park Inn on the Hessle Foreshore, so we stopped underneath the bridge to photograph their ‘Penny Drop’ session before being greeted by their wedding party. George is from a large Greek family and it will be no surprise that lamb was on the menu! After a lovely meal, a Greek band struck up and it wasn’t long before one of George’s family members took to the floor to perform a traditional dance – so much pride and passion! After a 10 minute display, the dance floor was full and dinner plates were being smashed to the cries of ‘Opa’ (for those of you who are not familiar with this word, it is used in Greek culture to describe ‘jubilant emotion during a ceremony’ but is also used for no apparent reason at all!)
I left the party at around 9pm and glad to get out in the fresh air – the temperature was so hot on the dancefloor!
Jill and George set off the next morning for a month long cruise of the far east and I’m really looking forward to catching up with them when they get back to share their story with them.

This website uses cookies to improve your experience while you navigate through the website. Out of these cookies, the cookies that are categorized as necessary are stored on your browser as they are essential for the working of basic functionalities of the website. We also use third-party cookies that help us analyze and understand how you use this website. These cookies will be stored in your browser only with your consent. You also have the option to opt-out of these cookies. But opting out of some of these cookies may have an effect on your browsing experience.
Necessary Always Enabled
Necessary cookies are absolutely essential for the website to function properly. This category only includes cookies that ensures basic functionalities and security features of the website. These cookies do not store any personal information.
Non-necessary
Any cookies that may not be particularly necessary for the website to function and is used specifically to collect user personal data via analytics, ads, other embedded contents are termed as non-necessary cookies. It is mandatory to procure user consent prior to running these cookies on your website.
SAVE & ACCEPT